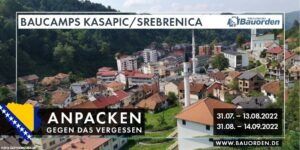 We need your support… For the construction work of the volunteers in Kasapic, the building order asks for donations to finance the necessary building materials.

With two international building camps, the Building Order is supporting the reconstruction of the village of Kasapic near Srebrenica in Bosnia and Herzegovina. The construction weeks take place from 31.07. until 13.08. and 31.08. until 09/14/2022. More than 8,000 people, almost exclusively men and boys, were murdered by Serbian nationalists within a few days in Srebrenica and the surrounding villages during the Bosnian war in July 1995. 25 years after the Srebrenica genocide, a group of young survivors returned to one of Srebrenica’s villages and worked to rebuild a peaceful community opposed to growing nationalism and racism. The idea was born to transform the completely destroyed and uninhabited village of Kasapic near Srebrenica into an eco and peace village called Ekometa. The association “Prijatelj Prirode – Oaza Mira” is the sponsor of this project. In the last two years, four houses and a mill have been built using traditional local craftsmanship. The Bauorden supports this project. “With our construction weeks, we also want to set signs of hope and reconciliation,” explained the managing director of the Bauorden, Peter Runck. In the two construction camps, the mill will be completed and another wooden house will be built, which will offer accommodation and lounges for future youth groups in the village. A water mill dam and a wooden bridge will also be built. There is a lot to do in Kasapic.