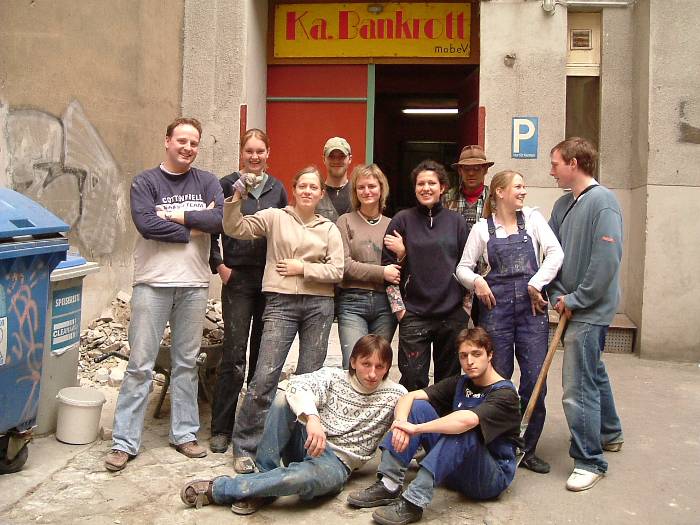 Bauorden. Lend a hand and change the world.

For over 60 years, Internationaler Bauorden (IBO) has been organizing international youth exchanges, peace services and charity projects in Europe. Bauorden promotes social commitment and international encounters. We support non-profit organizations with so-called building camps by providing construction and renovation work. Young (and old) people donate time and labor. The volunteers work without pay and will receive in return free room and board. You will have to pay your travel expenses to the building camps as well as small registration fee. The IBO is based in Ludwigshafen am Rhein and is recognized as charitable. Peter Ruck has been the managing director of Bauorden since 2001.

Baurorden was founded in 1953 by the Dutch priest Werenfried van Straaten. He encouraged young people and students to help build homes for refugees and displaced persons in Germany. The aim is to reduce housing shortage. The first construction-trip takes place in Nienberge near Munster/Westphalia from April 6 to 18, 1953. That same year, another 17 construction-trips are being organized. 600 „yourneymen“ from four countries are working together. Independent, national Bauorden-Organizations, which cooperate closely, are founded in Belgium, the Netherlands, Germany, France, Switzerland, Austria, Italy, Hungary and Bulgaria.

„Bauorden started as a work of reconciliation and an act of charity. That is and always will be the bottom line. People are far better than we think – the large numbers of volunteers have proven this over the past few years.“

Bauorden Germany is supported by a non-profit association (Internationaler Bauorden Deutscher Zweig e.V.). The head office is based in Ludwigshafen (Gemeinnützige Bauorden GmbH). The majority of the costs are covered by donations. The IBO receives project bound funds from the Kinder- und Jugendplan (KJP) and other foundations. In addition, Bauorden receives EU subsidies from the erasmus+ program.

Who do we help?

Bauorden supports orphanages, facilities for disabled people, meeting centers, facilities for the elderly, children’s villages, women’s shelters, hostels for the homeless and facilities for addicts. We also help with the rebuilding of churches and monasteries. Bauorden also makes a special commitment to support large and financially vulnerable families. We also help regularly with the renovation of Jewish cemeteries and memorials for the victims of National Socialism. Many things are possible. There are building camps all over Europe.

Bauorden organizes projects, takes care of the tools – especially in Central and Eastern Europe -,a portion of the building material and the necessary insurance of the volunteers. The projects abroad receive a grant for board and lodging of the volunteers. This is made possible by the donors of the Bauorden.

Bauorden is not a place for meditating or debating: Bauorden always means seven to eight hours of physical labor each day. The volunteers get to know the country and its inhabitants while simultaneously contributing to the understanding between nations. Friendships will be built across all forms of boarders. Talents will be discovered an encouraged.

“Stop running your mouth – Start lending a hand” is the motto of the aid projects of Bauorden.

When you join Bauorden you work, live and learn together in aid projects for two to four weeks. You contribute to international understanding while helping people in need at the same time. Lend a hand and change the world.

Bauorden is a volunteer-receiving and -sending-organisation accredited by the European Volunteer Service (EVS). Since 2009, Bauorden has been a member of the “Bund der katholischen Jugend” (Catholic Youth Association) as a youth organization. Bauorden is an expert body in the European networks of EURODESK and advises youths and specialists regarding mobility opportunities (voluntary work, internships, Au-pair etc.) in Europe.

“I never forgot the words ‘Schubkarre’ (wheelbarrow), ‘Wasserwaage’ (spirit level), ‘Kelle’ (trowel) and ‘Pickel’ (pick). It’s unbelievable: In a small town in Germany I learned what ‘reconciliation’, ‘tolerance’ and ‘Europe’ means. I am still grateful for this today.”

This website uses cookies to improve your experience while you navigate through the website. Out of these, the cookies that are categorized as necessary are stored on your browser as they are essential for the working of basic functionalities of the website. We also use third-party cookies that help us analyze and understand how you use this website. These cookies will be stored in your browser only with your consent. You also have the option to opt-out of these cookies. But opting out of some of these cookies may affect your browsing experience.
Necessary immer aktiv
Necessary cookies are absolutely essential for the website to function properly. This category only includes cookies that ensures basic functionalities and security features of the website. These cookies do not store any personal information.
Non-necessary
Any cookies that may not be particularly necessary for the website to function and is used specifically to collect user personal data via analytics, ads, other embedded contents are termed as non-necessary cookies. It is mandatory to procure user consent prior to running these cookies on your website.
SPEICHERN & AKZEPTIEREN