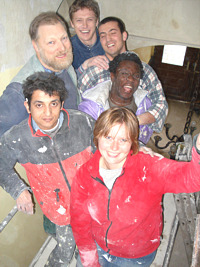 Why does Bauorden need donations?

Bauorden wants to enable young people to engage in international exchanges and offers them the opportunity to contribute to society. For this purpose Bauorden needs reliable capital resources and will have to rely even more on private donations in the future.

IBO organizes about 40 – 50 Workcamps which last several weeks with over 420 participants. In addition, we organize 80 Workcamps in several European countries with about 2.000 participants. About 360.000 young people (craftsmen, students, employees) have joined the Workcamps of the IBO since its foundation. Working with Bauorden means: Taking responsibility; demonstrating initiative and discovering talents; getting to know the country and the people; helping people to help themselves; turning affected people into involved people.

How is Bauorden being financed?

For its work IBO receives EU subsidies for special projects as well as earmarked grants from foundations (Robert Bosch-Stiftung / Stiftung Erinnerung, Verantwortung und Zukunft u.a.). some of the Workcamps in Germany are being financed by funds from the Federal Government’s Child and Youth Plan (Kinder- und Jugendplan des Bundes  – KJP). Contributions of companies are also a big help. But the participants also contribute by paying the registration fee. A donor pool of about 1.100 people – predominantly former participants – pays for the majority of the financial expenses.

Who audits the finances?

Bauorden has been established as a Gesellschaft mit beschränkter Haftung (limited liability company),  “Gemeinnützige Bauorden GmbH” and is recognised as a non-profit and particularly eligible organisation by the tax office Ludwigshafen (23.11.2015). On average, the annual budget of Bauorden is 380.000 Euro. The annual accounts are being audited by an independent auditor.

What is my donation used for?

We need 5 to 7 Euro per participant and per day for the accommodation, the catering (in projects abroad) and the insurance of the volunteers. We support the Workcamps in Middle and Eastern Europe by paying for building materials and tools. One can already accomplish a lot with 1.000.- Euro. Young volunteers from Eastern Europe, who work in German Workcamps without pocket money, receive a travel allowance.